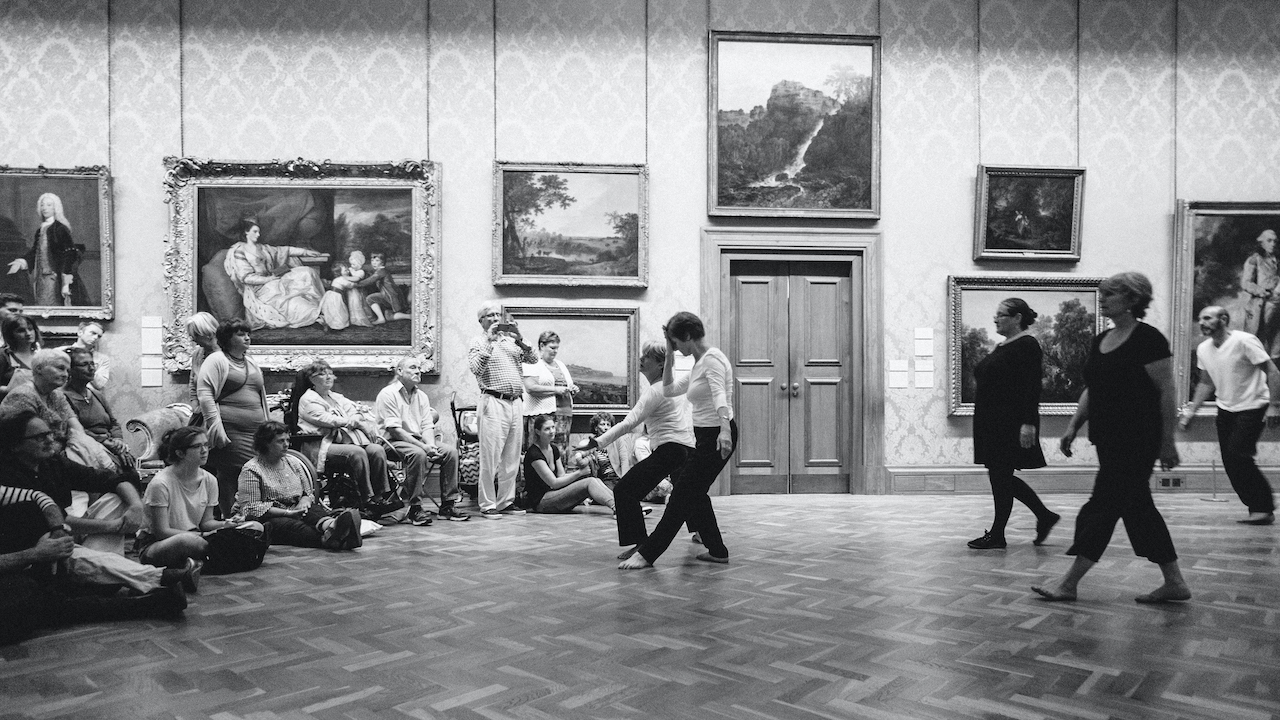 We explore material that doesn’t make concessions to age or ability. Our structured improvisational approach creates performances of real authenticity with humour, drama and colour.

GOOD NEWS FROM THE FUTURE (GNFTF) meet weekly or fortnightly on Sunday mornings. Meetings take place at Chapter or, during the COVID-19 pandemic, at Thompson’s Park, Cardiff – to exercise and to create and to rehearse performances.

We perform in non-dance locations – museums, galleries, public places – as well as in theatre spaces.

We are committed to marrying music and movement: aiming to evolve forms of movement that are accompanied by – and that respond to – sensitive and stimulating musical soundtracks. These are increasingly generated live: GNFTF has an ongoing relationship with young Cardiff-based composer Samuel Barnes, who has written music for television series including Hinterland and Hidden and who is also bass player with band Boy Azooga.

In a further commitment to intergenerational cooperation, students from the Department of Theatre, Film and Television Studies at Aberystwyth University – under the direction of Dr Louise Ritchie – have created striking site-based performances based on GNFTF’s approaches in The National Library of Wales, Aberystwyth, and the School of Art, Aberystwyth University.

Over seven years, we have come to know, trust and care for each other’s physicality.

Working together has been inspirational and an invitation to be more joyfully courageous.

Happy in our own skins and driven by a hunger to move, this exciting time of our lives – free from any constraints on how we might appear – brings a whole new set of delights for performers and audiences alike.

Physical theatre by the over-60s.

Good News From the Future (GNFTF) brings together a group of mature performers that includes pioneering physical theatre practitioners, a clutch of people who haven’t performed for a long time, and some people who’ve only recently started.

GNFTF is based at Chapter (Arts Centre) in Cardiff, Wales.

Header photo: Good News from the Future, What Comes Next? © Mark Douet